New Camry on the new platform 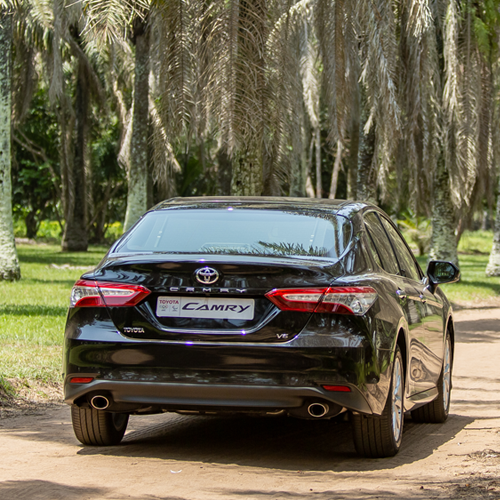 After the Corolla, the world’s bestselling model, Camry is one of the most popular models in the Toyota range. The Toyota Camry has been around as a model since 1982.  In its seven generations to date, it has been sold in 19 million units, and is now selling at around 700,000 units a year globally.

The name "Camry" derives from the Japanese word kanmuri (ja: 冠, かんむり), meaning the "crown". This follows Toyota's naming tradition of using the crown name for primary models starting with the Toyota Crown (1955), continuing with the Toyota Corona (1957) and Corolla (1966 – the crown of flowers); the Latin words for "crown" and "small crown".  This came from the belief that the “crown” name will bring the success and awards to new models.

The eighth generation Toyota Camry was created, alongside in America and Europe.  Toyota first man, Akio Toyoda, marked the 2014 model year with an ambitious statement: "No more boring Toyota vehicles".  What he meant is, Toyota vehicles are going to be more attractive and appealing, not only reliable and durable.

The new eighth Camry is made from scratch, and 24,000 (twenty-four thousand) new parts have been developed for it.   Engineers that developed a vehicle are not aware of the notion of a boring car, but they know the term “platform” on which the vehicle rests, which in combination with the driving performances creates the character of the vehicle.  Toyota frequently mentions its new TNGA global platform, which debuted in the new Camry's body with the additional "K" mark in the description name. In practice, TNGA-K lowered the center of gravity, as well lowering the seating position. Although, Toyota Camry is not a sports sedan, many automotive journalist tests across the World state that this model just might be the most sportive Toyota sedan ever.

In the conclusion, the new Toyota Camry has got it, the driving dynamics as well as the attractive design.

Toyota hopes to continue to provide cars that its customers cherish.